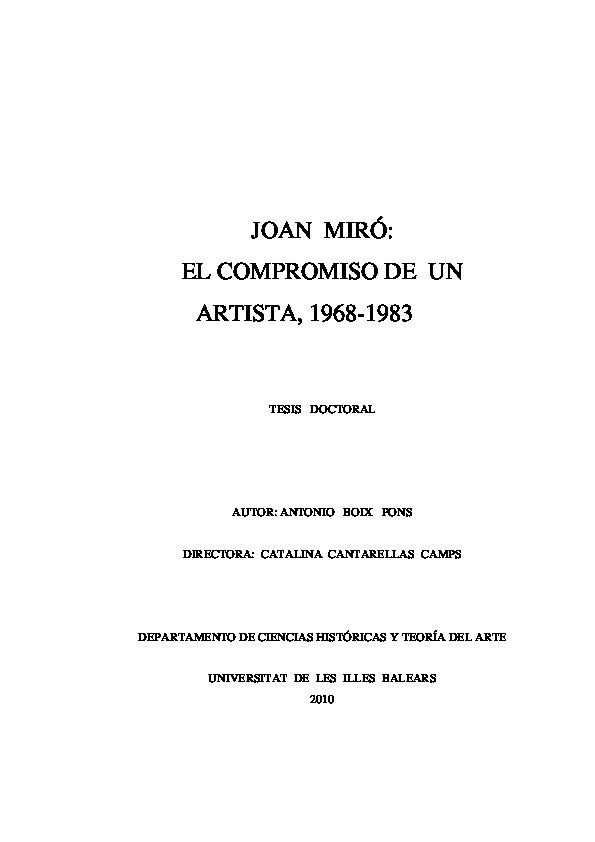 This thesis proves that the evolution of life, thoughts and work of Joan Miró in the 1968-1983 period is deeply related with his historical context in its political, economic, social, cultural and artistic. A solid conductor is his social and artistic commitment, based on four fluent influences in ideological which were depositing from childhood to old age: Catalan nationalism, Catholicism, moral conservadurism and progressive political. Such influences were sometimes contradictory and this was a personal tension, that he resolve in this period of 1968-1983 with a greater involvement in the struggle for human rights and the Spanish democracy, which is manifested in his support for acts of opposition against Franco, with the milestone of his participation in the closure of Montserrat in 1970 and the aid to the oppressed victims, and his commitment to achieving the autonomy of Catalonia and the Balearic Islands, which eventually leads him, after moving Transition democracy in 1975, to become one of the leading artists of Catalonia and even Spain, as evidenced by the significant public commissions, the great exhibitions, the largest projects of two foundations at Barcelona and Palma of Majorca, and his excellent relations with the Kings of Spain, the Culture ministers of Spanish governments, the presidents of the Generalitat of Catalonia, and the mayors of Barcelona and Palma of Majorca. And all this is reflected in an artistic response with a renewed openness to the latest avant-garde artistic movements, which are now the Arte Povera, especially the use of debris; ephemeral art in 1969 the murals of the College of Architects of Barcelona and the Expo in Osaka; brutalism as the “toiles brûlées” in 1973; the return to dramatic expressionism of “wild paintings” which had already manifested in the most tragic times of the Civil War; the growing predominance of black and gestualism, what had already experienced in the sixties; the alternation between thought and spontaneous styles; the approach of his work in series and groups both in painting and other arts; the highest propensity to make larger works; and the use of almost all artistic useful means to achieve more widespread popular. The painting was always his favorite art, which shaped and informed the other arts. The original Miro’s works are fertilized by his lively internal debate between tension to express universal ideas, with a tendency to abstraction, while his personal emotions, more prone to the use of figuration, using motives and methods of artistic tradition, the personal and collective subconscious, and the experimental will of the avant-garde transgression.