Albrecht Dürer. A Guide to Research

Albrecht Dürer. A Guide to Research 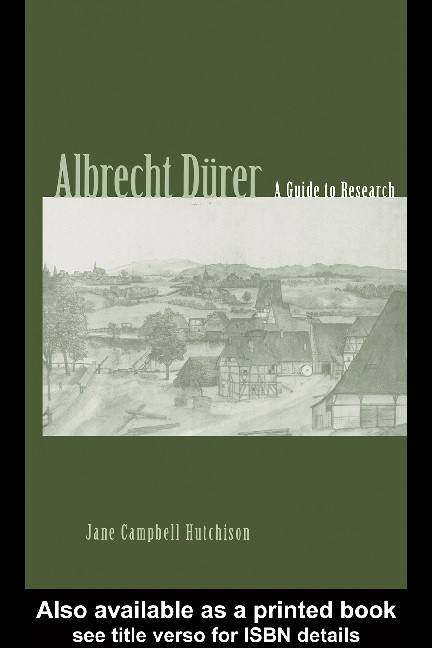 The present volume supplements, but by no means replaces the excellent Dürer-Bibliographie published by Matthias Mende in honor of the artist’s five hundredth birth anniversary in 1971 (q.v.). Since that time some of Dürer’s lost watercolors have been found, two of his portraits have been returned to the Weimar Museum, and two of the three religious works from the Alte Pinakothek, attacked by a vandal in 1988, have been restored. During this time the oeuvre of Hans Hofmann has grown, while the number of Dürer’s nature studies has grown smaller. Changes of ownership, physical condition, attribution, and questions of the artist’s reception have been of primary importance here. Only the most basic items from the pre-1971 literature have been included here, together with certain works of historic interest, and works published in the United States that were not available to Mende. Bearing in mind that some users of this work may be curators whose own specialties may lie in other areas than German art, generous summaries of the most important works are given; these are intended merely as guides to the literature, and should in no case be regarded as substitutes for the original documents.

The serious researcher also will need ready access, at a minimum, to Mende’s bibliography, as well as to the corpus of Dürer’s written work edited by Hans Rupprich (Dürers schriftlicher Nachlass, q.v.); Fedja Anzelewsky’s catalogue of the paintings (2nd edition, 1990, q.v.); one of the several catalogues of the artist’s prints, such as those by Josef Meder, Karl-Adolph Knappe, or Walter Strauss’s volume for The Illustrated . . .