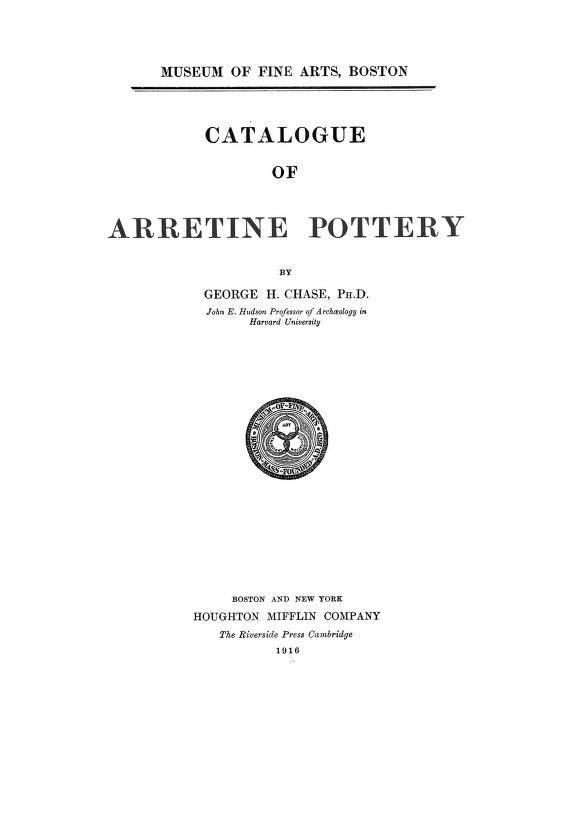 The pressed clay bowls with red glaze made at Arretium (modern Arezzo) and therefore known as Arretine ware, are of interest primarily because they reproduce designs from the charming repousse silver bowls of Hellenistic workmanship. As they have attracted the attention of collectors only in comparatively recent years, it has been possible for this Museum to secure an unusually fine series of bowls, moulds, and fragments. The history of the collection is briefly told. In 1888 a series of ten bowls and sixteen fragments was included in a purchase from Signor Lanciani, whose notes indicate a quick appreciation for their peculiar beauty. In 1900 and 1913 a few pieces came by gift; the foundation of the collection, however, was laid in 1898 by the purchase of sixty-nine pieces from the collector to whom the excellence of the Museum's classical collection is so largely due. Nineteen pieces were purchased in 1904, ten in 1913, and one or two each year in 1897, 1900, 1901, 1903, and 1910, all from the same source. The collection thus formed has not been unknown to scholars. As additions have been made they have been described in the annual reports of the curator of classical art from 1895 on. Casts have been placed on sale, some of which are described by F. Behn in a catalogue of the Mainz Museum, which gives a survey of the development of Roman pottery. For the following catalogue of the Boston collection the Museum has been most fortunate in securing the services of Professor George H. Chase, whose catalogue of the Loeb Collection of Arretine Ware  has been an epoch-making work in this field. For the convenience of students the introduction has been revised and reprinted from that work. The Museum further is deeply indebted to Mr. James Loeb for the generous gift which has made it possible to print the volume at the present time. It is but one more example of the devoted interest in the remains of classical antiquity and their lesson for our age, on the part of this scholar and patron of scholarship.