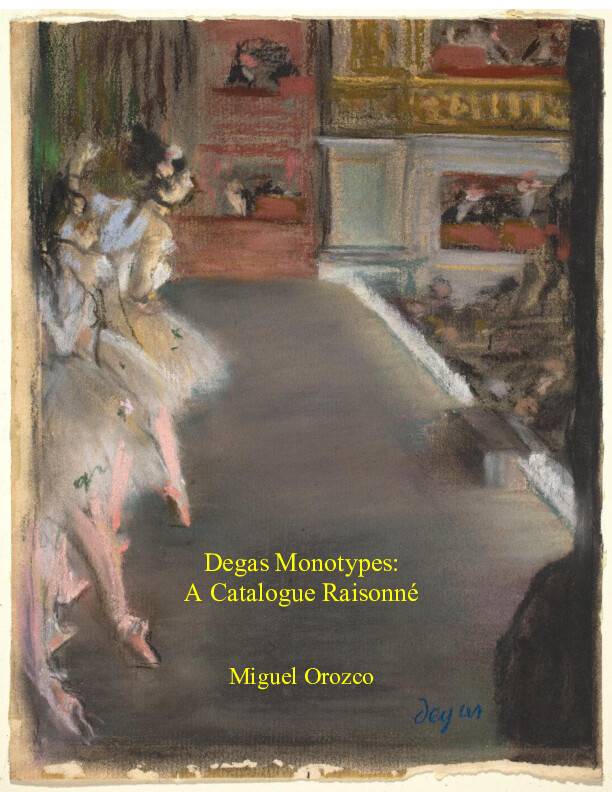 The present work constitutes a continuation, updating and completion of the 1968 catalogue by Eugenia Parry Janis Degas Monotypes: Essay, Catalogue and Checklist. Janis catalogue, while still useful for experts, is not at all suitable for the general public. And having been written fifty years ago, it has aged badly: it did not contain a single color photo, it could not give any indication on the whereabouts of almost half the monotypes Janis thought Degas had made and it only located 75 monotypes in world museums, and thus in principle viewable. A new catralogue of Degas monotypes seemed to Orozco useful for the wide public, and also for experts, who would have in it a quick reference tool saving them time and trouble. The purpose of this book is thus simply to bring to the general public, to the academic world and to critics and experts what the author felt was necessary: a new, updated catalogue of Degas monotypes including color photographs. The reason is that even if his monotypes are often considered as one of the most intriguing and important facets of Degas work, nobody had dared to do the major research needed and satisfy this need. One of the main reasons for embarking in this project was to find, if at all possible, the whereabouts of all Degas Monotypes. In the Janis catalogue, the author declared missing 44 % (141 monotypes) of the total 321 described. We feel that our efforts have paid: out of the 397 monotypes we have uncovered, only 13 % remain missing (52). But above all, the main achievement is that Orozco has managed to raise the number of catalogued monotypes from the 321 in the Janis to a total of 397. Orozco has located 191 in world museums (116 more than Janis and 48 % of all monotypes in our catalogue); 124 in unidentified private collections (31% of all monotypes in the catalogue); 26 in named private collections and 5 in Art Galleries. The evolution is natural. On one hand, traditional, identified collectors have donated (or sold) many of their Degas monotypes to museums, thus increasing the share of museums from 76 (24 %) in Janis fifty years ago to 191 (48 %) in the present study. This has reduced the share of monotypes in the hands of identified, traditional collectors from 70 (22 %) in 1968 to just 26 (6,5 %). But this does not mean that the overall share of private collectors has fallen: in fact it has risen from the 92 monotypes they held in 1968 (28 % of all Janis entries) to 150 pieces in 2019 (37 % of Orozco entries)