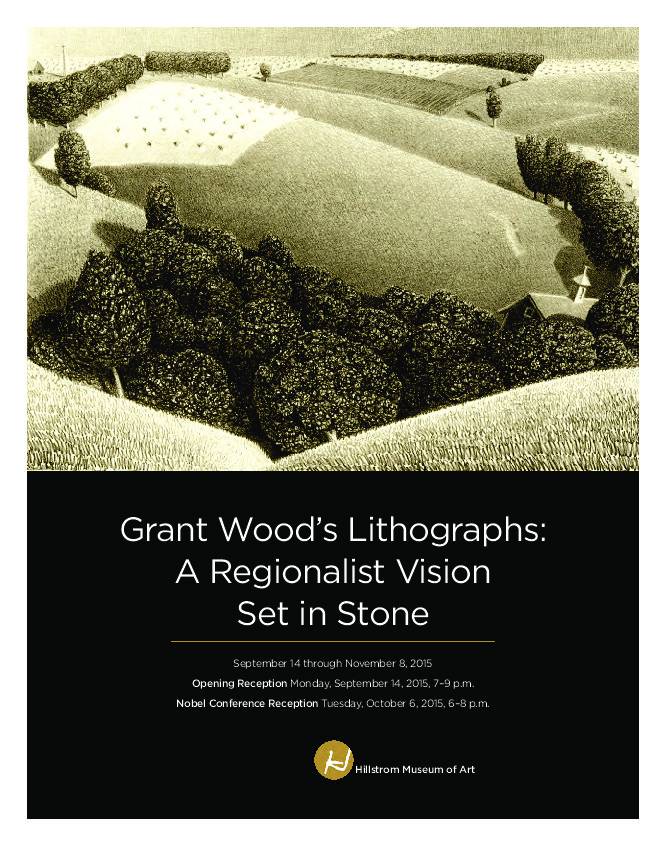 The Hillstrom Museum of Art’s complete set of examples of all nineteen of the lithographs made by famed Regionalist artist Grant Wood (1891–1942) is the result of the generosity of Museum namesake, the late Richard L. Hillstrom and, especially, Dr. David and Kathryn Gilbertson. All but one of the prints were donated by them, including three from Hillstrom alone, four from him and the Gilbertsons together, and the remaining eleven from the Gilbertsons alone. This exhibition, which is the first time these works are being shown as a group, is presented in memory of Hillstrom and in honor of the Gilbertsons. Wood’s lithos were created in the last half decade of his life and they were the locus of much of his artistic efforts in that period, when he painted only a handful of pictures and spent a great deal of time lecturing. As a group, the prints constitute around one fourth of the artist’s mature body of work. Although any full consideration of Wood’s career must therefore take them into account, they have tended to be neglected or dealt with superficially in the literature on the artist. Wood had little experience in printmaking prior to beginning his work in lithography, though he appreciated the artistic legitimacy of prints and he had included lithography in the curriculum of the Stone City (Iowa) Art Colony that he helped created and run during the summers of 1932 and 1933. Lithography is a more recent form of printmaking than engraving and etching and because of its process is a freer medium, similar to drawing and more capable of capturing subtle nuances of handling and detail. The artist draws her or his image directly on a slab of fine-grained limestone using a greasy litho crayon. The printing surface is then moistened with water and then inked with oily lithographic ink, which adheres to all the marks made by the artist but not to the unmarked, water-soaked areas of the stone, since oil is repelled by water. A sheet of paper when pressed to the inked stone surface picks up the artist’s image in remarkable detail and fidelity, and in reverse. When the edition of lithographs has been completed, the stone can be carefully cleaned of all the greasy marks from the litho crayon and then reused for a new print.