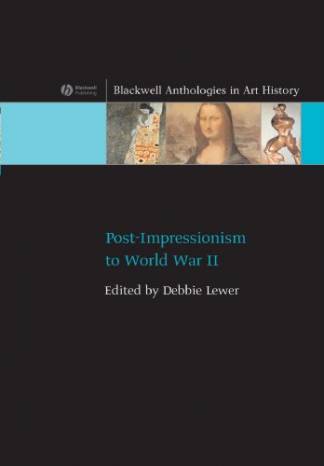 Post-Impressionism to World War II online full-text eBook  - is an exciting anthology of the best art history writings of the Post-Impressionist period. Several key essays by critics including Benjamin, Greenberg and Bürger knit together primary sources and classic, “canonical” criticism.

"This is a neat little collection of textual sources that will prove invaluable to students and teachers of high modernism. Debbie Lewer has done an excellent job in editing an exemplary selection of texts from the familiar to the obscure... This anthology represents the first book to be published as part of a new series: the Blackwell Anthologies in Art History. These books will provide overviews of major periods in art history. If they are all of this consistent quality then this will prove to be an excellent and invaluable series." The Art Book

“Post-Impressionism to World War II is a skillfully selected anthology of texts on art history and theory which will be of great value to undergraduate and graduate students of art history and cultural theory.” Andrew Causey, University of Manchester

“At the heart of Debbie Lewer’s selection of texts lies a powerful sense ofthe way modern art intersected with broader political and cultural debates.This will prove to be an inspiring and enduring resource for students oftwentieth-century art.” David Hopkins, University of Glasgow

“This is an invaluable collection of the texts that set the terms for and responded to the modernist projects of the twentieth century, supported by clear, nuanced editorial essays situating them within a range of critical understandings.” Elizabeth Legge, University of Toronto

Post-Impressionism to World War II is an exciting anthology of writings by artists, critics, and historians. The texts include primary sources from the 1880s to the eve of war in the late 1930s, knit together by classic analyses from critics such as Benjamin, Greenberg, and Burger. The volume also includes more recent critical interventions from a range of methodological perspectives, both well-known and less familiar. Introductory essays explore the key themes raised by the texts. The result is a vivid chronicle of avant-garde practice in Europe during an especially creative, and volatile, period of history.