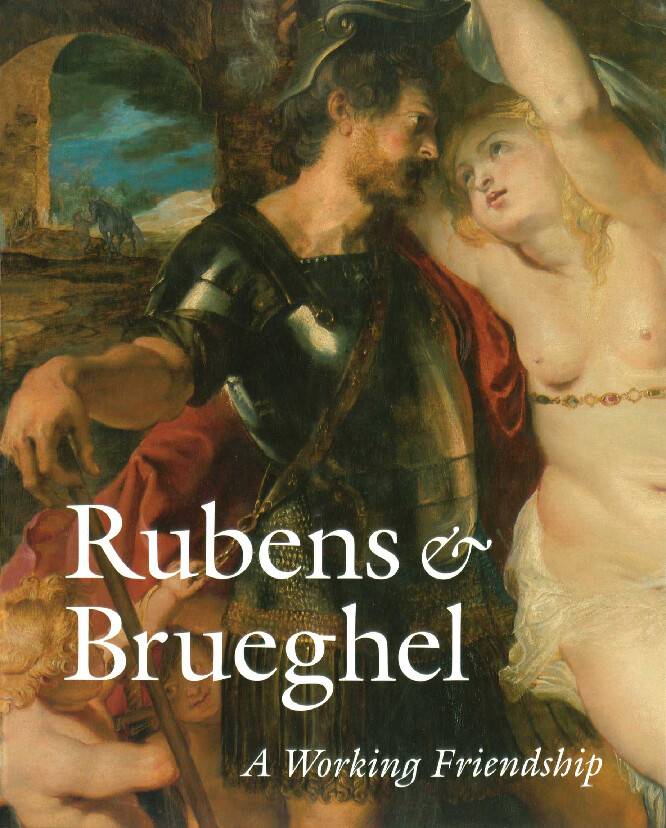 At the beginning of the seventeenth century, Peter Paul Rubens and Jan Brueghel the Elder were the two most famous painters in Antwerp. They were also close friends and frequent collaborators, who over the course of twenty-five years, from about 1598 to 1625, executed approximately two dozen works together. The two artists had much in common—they both oversaw productive workshops and had the honor and distinction of serving as court painters to the regents of the Southern Netherlands—but their joint oeuvre benefited greatly from their differences. A prolific landscape and still-life painter, Brueghel was renowned for his remarkably meticulous and jewel-like works, which won him the sobriquet “the Velvet Brueghel.” Rubens was an ambitious painter of large-scale altarpieces and history paintings, who was notably successful at capturing emotion and corporeal energy. The uniting of their distinctive styles of brushwork and individual visual modes produced beautiful and richly allusive compositions that are as highly sought after today as they were by the artists’ contemporaries.

Rubens and Brueghel: A Working Friendship is the first international loan exhibition devoted to the artists collaborative works and an investigation of their working methods. Assembled here are some of the most important works of Brueghel and Rubens’s partnership—from the early war themes, to mythological landscapes and allegories, to iconic paintings of the Madonna and Child surrounded by garlands of fruit and flowers—as well as a select group of works executed with other collaborators, including Hans Rottenhammer, Hendrick de Clerck, Hendrick van Balen, and Frans Snyders. Together, these paintings reveal the nature of collaboration as practiced in the Netherlands in this period. What also emerges is the unique character of Brueghel and Rubens’s conceptual alliance—a rare partnership of equals, a complex and reciprocal relationship that gave rise to works of unparalleled delight.

Anne T. Woollett is associate curator in the Department of Paintings at the J. Paul Getty Museum, specializing in Northern painting before 1700. She has lectured and published on Rubens, late-sixteenth-century Flemish painting, and Rembrandt. She co-organized the Getty Museum exhibition Making a Renaissance Painting and contributed to the exhibition catalogue Rembrandt’s Late Religious Portraits.

Mark Leonard is head of the Department of Paintings Conservation at the Getty Museum. He has published on a number of different topics, ranging from studies of artists techniques to the introduction of new materials for use in conservation.

Ariane van Suchtelen has been curator at the Royal Picture Gallery Mauritshuis since 1995, after having been assistant curator at the Rijksmuseum in Amsterdam from 1990 to 1995. She has co-organized diverse exhibitions, including Dawn of the Golden Age (Rijksmuseum), Johannes Vermeer, and Rembrandt by Himself. Her publications include Holland Frozen in Time: The Dutch Winter Landscape in the Golden Age and Portraits in the Mauritshuis (with Ben Broos).

Jørgen Wadum is a paintings conservator and an art historian and is currently chief conservator at the Statens Museum for Kunst, Copenhagen. Since 1984 he has specialized in the painting techniques of sixteenth- and seventeenth-century Dutch and Flemish artists. He has published and lectured internationally on a multitude of subjects related to this and other issues of importance for the understanding and conservation of our cultural heritage.