The Essays of Montaigne: Book 1. Done into English by John Florio, Anno 1603. Edited with an Introduction by George Saintsbury. 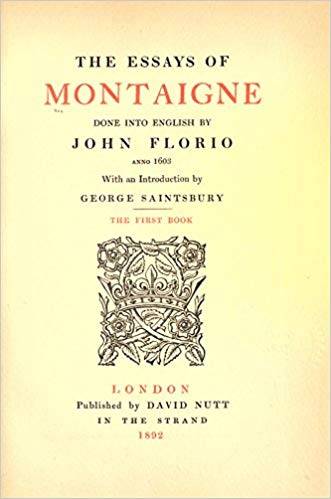 The Essays of Montaigne: Book 1. Done into English by John Florio, Anno 1603. Edited with an Introduction by George Saintsbury.

The Essays (French: Essais, pronounced [esɛ]) of Michel de Montaigne are contained in three books and 107 chapters of varying length. They were originally written in Middle French and were originally published in the Kingdom of France. Montaigne's stated design in writing, publishing and revising the Essays over the period from approximately 1570 to 1592 was to record "some traits of my character and of my humours." The Essays were first published in 1580 and cover a wide range of topics.

Montaigne wrote in a rather crafted rhetoric designed to intrigue and involve the reader, sometimes appearing to move in a stream-of-thought from topic to topic and at other times employing a structured style that gives more emphasis to the didactic nature of his work. His arguments are often supported with quotations from Ancient Greek, Latin, and Italian texts such as De rerum natura by Lucretius and the works of Plutarch. Furthermore, his Essays were seen as an important contribution to both writing form and skepticism. The name itself comes from the French word essais, meaning "attempts" or "tests", which shows how this new form of writing did not aim to educate or prove. Rather, his essays were exploratory journeys in which he works through logical steps to bring skepticism to what is being discussed