THE ICONOGRAPHY OF REMBRANDT’S DEPICTIONS OF THE HOLY FAMILY 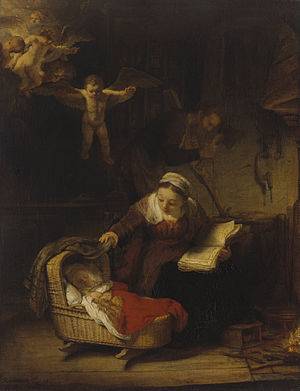 THE ICONOGRAPHY OF REMBRANDT’S DEPICTIONS OF THE HOLY FAMILY

paintings of the Holy Family in a domestic or domestic/workshop setting. All of these works

were, at one time, attributed to Rembrandt van Rijn. Although doubt now has been expressed by

experts as to the authenticity of at least two of the paintings, namely, the Holy Family at Night (c.

non-Biblical context. If these are not works by Rembrandt’s own hand, they are certainly

variants of his ideas, painted by artists in his circle. The remaining paintings consist of the Holy

Virgin with the Cat and the Snake.

Prior to a consideration of the aforementioned works of art, both individually and as a group,

and in order to ascertain whether or not Rembrandt was influenced by earlier artists, a brief

overview of depictions of the Holy Family in imaginary settings is provided, covering a period

from the time of the Renaissance to the beginning of the seventeenth century. Mention also is

Reformation, particularly with respect to the art of the north Netherlands.

Lastly, a look at a few depictions of the Holy Family by Rembrandt’s students and followers

gives some indication of the extent to which they emulated his work. A comparison of the

treatment of the same subject by Peter Paul Rubens and Jacob Jordaens, both of whom worked in