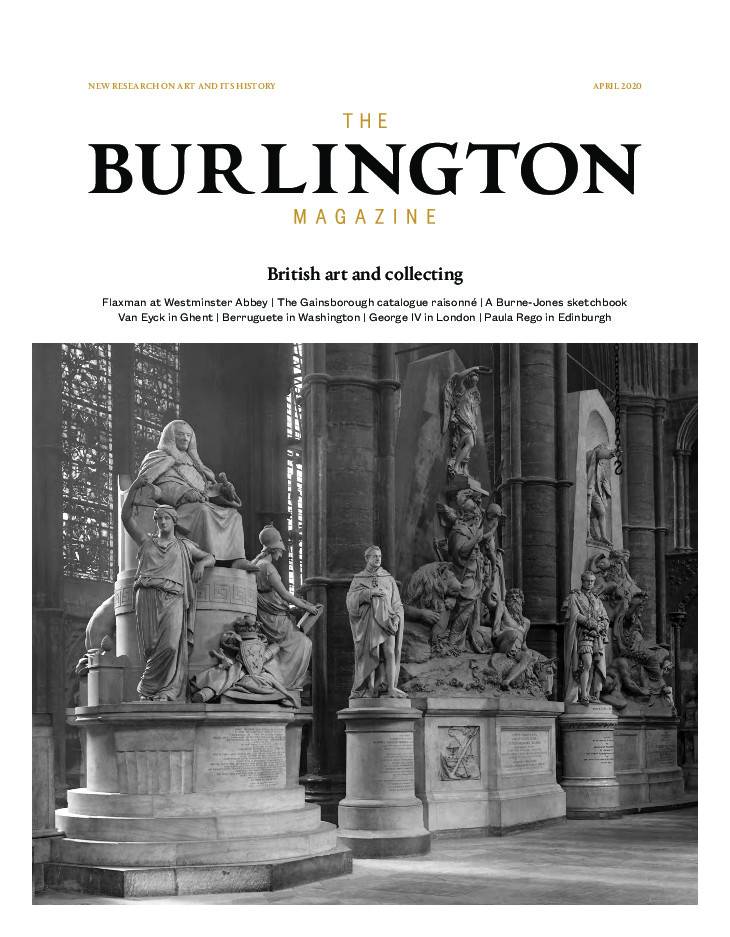 EDITORIAL
Art and illness
Art can make you feel better. Few readers of The Burlington Magazine would doubt that statement, but it was recently given scientific verification in experiments carried out at the University of California at Berkeley by a team led by the psychologist Dacher Keltner, whose research focuses on the biological and evolutionary origins of emotional expression. On a given day two hundred students were asked to note how often they felt positive emotions, including pleasure in experiencing works of art. Samples of their gum and cheek tissue were then tested for the presence of a marker of inflammation, the cytokine Interleukin 6, which the body produces to fight infection. The lower the level of the cytokine, the healthier the subject, and the subjects with the lowest levels were those who had experienced positive emotions triggered by art, nature and music.(1)

This experiment confirmed the common belief that there is a link between art and mental well-being, which is one reason why art that is implicated in mental illness – most famously in the case of Vincent van Gogh – is so unusually powerful, as it seems to enact the achievement of harmony out of disorder. In the twentieth century art became a tool of medicine in the form of art therapy, which is widely used to help manage addictions, for example, or to improve symptoms of anxiety and depression. Art therapy is interesting for art historians partly because its focus on the associations between the creative choices made in therapeutic sessions and a subject’s inner life throws light on the way the human brain responds to art in everyday contexts – an interest that has led in recent years to the rise of a new discipline, neuroarthistory.(2)

Perhaps because the circumstances of its creation have tended historically to be celebratory – of a divinity, a people or a patron – art has dealt with physical illness only intermittently over the centuries. Even when it is a subject, it tends to be represented in the optimistic context of a cure being offered. When in medieval and Renaissance art, St Roch bares his thigh to show a lesion caused by bubonic plague, the saint, who was himself cured of the disease by angelic intervention, holds out the promise of remedy to those who pray. Medical subjects in art tend to focus on the positive actions of doctors – for example, diagnosing an illness by examining a vial of a patient’s urine, as in a painting by David Teniers the Younger, teaching an anatomy lesson, as in Rembrandt’s famous canvas in the Mauritsthuis, The Hague, or giving a vaccination, as in L.P. Boilly’s scene of a doctor attending a middle-class French family in 1807 (Wellcome Collection, London). Yet although deathbed scenes are not uncommon in early modern art, partly for the message they were intended to convey about the state of a person’s soul at the end of life, images of sickbeds are rare before the mid-nineteenth century.

Thereafter an interesting gender divide opens up in depictions of invalids: men are often shown injured, usually from battle, but rarely as ill. The classic representations of the unwell are of women, most famously Edvard Munch’s recollection of the death of his sister from tuberculosis, The sick child, painted in 1885, a composition that he returned to several times over the next forty years. Similarly, the paintings by Gwen John on the theme of convalescence all depict women. This changed with the advent of AIDS. The significance of the works produced in response to the crisis by such artists as David Wojnarowicz, Keith Haring and Robert Mapplethorpe was, however, not so much its depiction of people with the disease, or even its radical challenge to the way governments were dealing with the epidemic, as the fact that the art was produced by men who were themselves infected.

Since the 1980s it has increasingly been the ill who have owned the depiction of their illness. Among the most powerful examples are the photographer Jo Spence’s documentation of the stages of her breast cancer in the 1980s and 1990s.(3) Medical science has become interested in the art produced by people with dementia, such as the self-portraits drawn by William Utermohlen (1933–2007) after he was diagnosed with Alzheimer’s disease in 1995. Art is also being used to promote medical interventions: in 2015, for example, the Bill and Melinda Gates Foundation sponsored a project, ‘The Art of Saving a Life’, in which artists, photographers and musicians from two dozen countries, including Vik Muniz and Annie Leibovitz, were commissioned to produce works encouraging vaccination.

Medicine and art history have long had a mutual interest. In its early years The Burlington Magazine published a three-part article, ‘Art and medicine’, by the editor of the Lancet, S. Squire Sprigge, who wrote appreciatively about Paul Richer’s book L’art et la médecine (1902).(4) Richer’s research had in part been prompted by an observation by the celebrated neurologist Jean-Martin Charcot that Rubens’s altarpiece in the Gesù in Genoa of St Ignatius casting a devil out of a young woman was an accurate depiction of acute hysteria. This is part of a tradition of doctors using works of art as evidence for making retrospective diagnoses – with varying degrees of plausibility – of such artists as Michelangelo (osteoarthritis), Francisco Goya (deafness) and Claude Monet (cataracts), or of their sitters – poor Mona Lisa has over the years been diagnosed with many disorders, ranging from heart disease and hyperlipidemia to hypothyroidism.

On the other side of the disciplinary divide, art historians have shown great interest in the visual legacy of medicine, notably in the seventeenth century, which has resulted in such studies as Domenico Bertoloni Meli’s Visualizing Disease: The Art and History of Pathological Illustrations (2017). In her book Painting as Medicine in Early Modern Rome: Giulio Mancini and the Efficacy of Art (2016), Frances Gage examined the intersection of artistic and medical discourse in Rome in the writings of the physician and art critic Giulio Mancini (1559–1630), demonstrating that the relationship between bodily health and the enjoyment of art was being discussed four centuries before Dacher Keltner and his colleagues carried out their experiments at Berkeley. At a time when an epidemic is temporarily depriving art in museums and galleries of its ability to reinforce physical and mental health, it is perhaps some consolation that present events are likely to provide inspiration for both artists and art historians for many years to come.