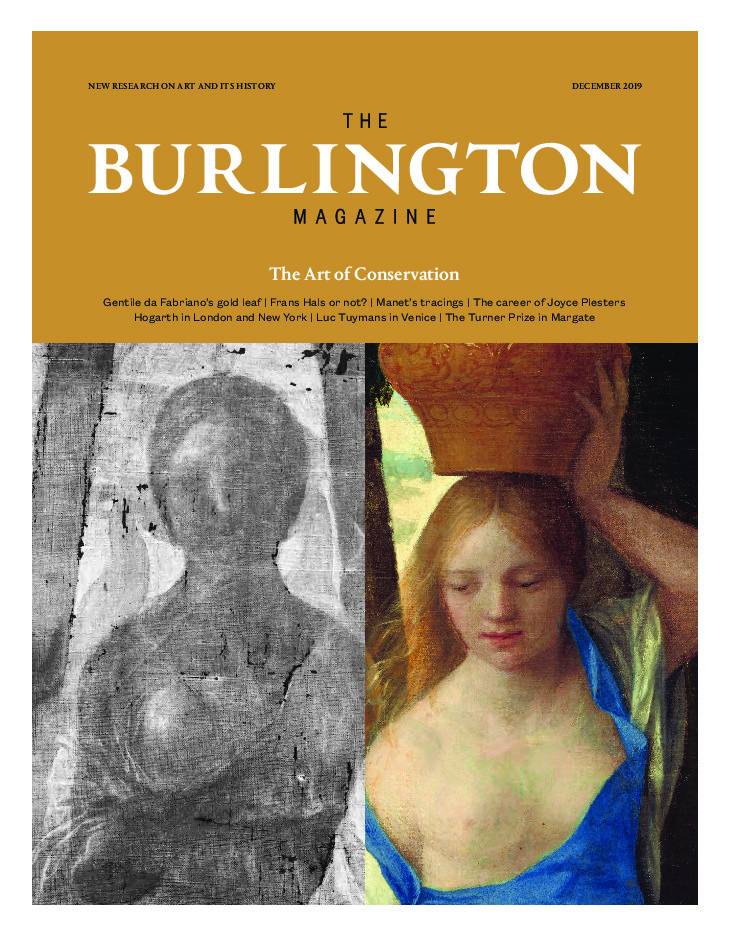 EDITORIAL
Forward to the 1970s

Last month we published the second edition of the online journal on our free-access digital platform, Burlington Contemporary (contemporary.burlington.org.uk). The journal’s ambition to present as diverse a range as possible of contemporary art history is amply fulfilled in articles that range from tightly focused analyses of individual works to wide-ranging surveys of current concerns. Sarah Messerschmidt, for example, uses a single work, Adrian Paci’s 2013 film The Column, which documents the production of a marble column on board a transoceanic freight ship, to ask difficult questions about the way that politically engaged art often appears to be situated within the networks of power that it condemns. By contrast, Chad Elias’s discussion of animal-human collaboration in contemporary art – including work with snakes, sharks, dogs and apes – ranges across a number of examples of artists who are blurring the boundaries between species in order to challenge the conceptualisation of the museum as a separation of culture from nature.

Given that the journal, like The Burlington Magazine, publishes peer-reviewed articles based on new research, the material that is submitted provides an intriguing sampling of current academic concerns. The patterns that emerge may sometimes be easy to explain: for example, the upturn in articles submitted to the magazine in the past couple of years on early modern female artists is unsurprising given the level of interest in Artemisia Gentileschi in particular, as demonstrated in books, exhibitions and museum acquisitions. There is a parallel in the number of articles submitted to Burlington Contemporary recently that address artists’ engagement with avant-garde practice in the 1970s.

In her article on WORKERS! (2015–19), a film and research collaboration between the Swedish artist Petra Bauer and the Scottish sex worker collective SCOT-PEP, Victoria Horne analyses the project’s response to feminist aesthetic debates of the 1970s, as manifested in films by Carole Roussopoulos and Chantal Akerman and a 1975 exhibition on female factory workers, Women and Work: A Document on the Division of Labour in Industry 1973–75, at the South London Art Gallery. Similarly, George Vasey uses the archive of the teacher and educationalist Keith Kennedy, recently acquired by the Wellcome Institute, London, to trace the way that Kennedy’s experiments in the 1970s with using photography as a form of therapy with young people in residential care facilities were responded to by his occasional collaborator, the photographer Jo Spence (1934–92), and argues that the impact of his work can be traced down to current photographic practices by such artists as Erica Scourti and Paul Mpagi Sepuya, who make art on and a out the internet.

No contemporary artist is interested only in the art of the present, so it is not surprising to see the past being re-examined and repurposed in this way. In the past few years, a new engagement with the art of the 1970s, or with artists who forged their creative identity in that decade, has become widespread, thanks in large part to a renewed interest in second-wave feminism, as manifested in the decade’s avant-garde film, as discussed by Horne, or photography, as addressed by Vasey. Recent examples include Sex Works, a collaboration between ten galleries at Frieze London in 2017 that presented the work of radical feminist artists working in the 1960s and 1970s, such as Renate Bertlmann and Mary Beth Edelson,(1) and Still I Rise: Feminisms, Gender, Resistance, a two-part exhibition at Nottingham Contemporary and the De la Warr Pavilion, Bexhill-on-Sea, in 2018–19.(2)

The 1970s are often recalled as a grey period sandwiched between the joyous experimentation of the 1960s and the newly confident capitalism of the 1980s. One of the interesting aspects of contemporary artists’ re-examination the 1970s is that they are changing perceptions of the decade, and in particular what might be called the ‘short’ 1970s, between the withdrawal of American troops from Vietnam in 1975 and the first reported cases of AIDS, in 1981, a period of remarkable creative engagement between art, education and activism. Arguably, the 1970s witnessed a hopefulness about the future that has never quite returned to avant-garde practice. A decline in optimism may seem surprising, given that the rise of the global enthusiasm for contemporary art is often reckoned to date from the 1980s, but for many artists today the burgeoning of art – or more precisely the art market – in the past thirty years is part of the problem for which they seek guidance in the immediately preceding past.

One aspect of the interest in the 1970s is aesthetic: a shared liking for the raw and rough that both reflects a belief that art should be a participatory, democratic activity and implies a dislike of the commodification of art that first became obvious in the 1980s. That aesthetic preference is strongly apparent in work by an artist who rose to prominence in the 1980s, Lubaina Himid, whose cut-outs are the subject of the fifth article in the journal, by Mora Beauchamp-Byrd. This emphasises that the sophisticated crudity of the cut-outs was related to Himid’s disruptive introduction of race into artistic discourse in Britain in the 1980s: much of the angry satire in her work is directed at the way that the practice of art reinforced social structures based on social and racial exclusion. She has also been an important role model for queer artists, emphasising that even in its most socially radical forms, art in the 1970s was often unreflectingly heteronormative as well as white.

To make her point, Himid has herself drawn on the art of the past – in particular William Hogarth’s satirical etchings, in part as mediated through David Hockney’s prints and set designs, but she has also, Beauchamp-Byrd argues, looked back to the dummy boards of Dutch and British interiors in the seventeenth and eighteenth centuries, which are interpreted as the silent servants of an aristocratic elite. The ease with which Himid moves across history is shared by many other contemporary artists. It is evident, for example, as Horne relates in her article on WORKERS!, in the way aspects of contemporary feminist practice, such as its interest in the relationship between women’s crafts and politics, can be traced back to the banners made by the suffragist movement of the early twentieth century. Such creative engagement with the past is a powerful response to the question of whether there can be such a thing as contemporary art history – a question that is answered in the latest issue of Burlington Contemporary’s journal in a compellingly rich variety of ways.