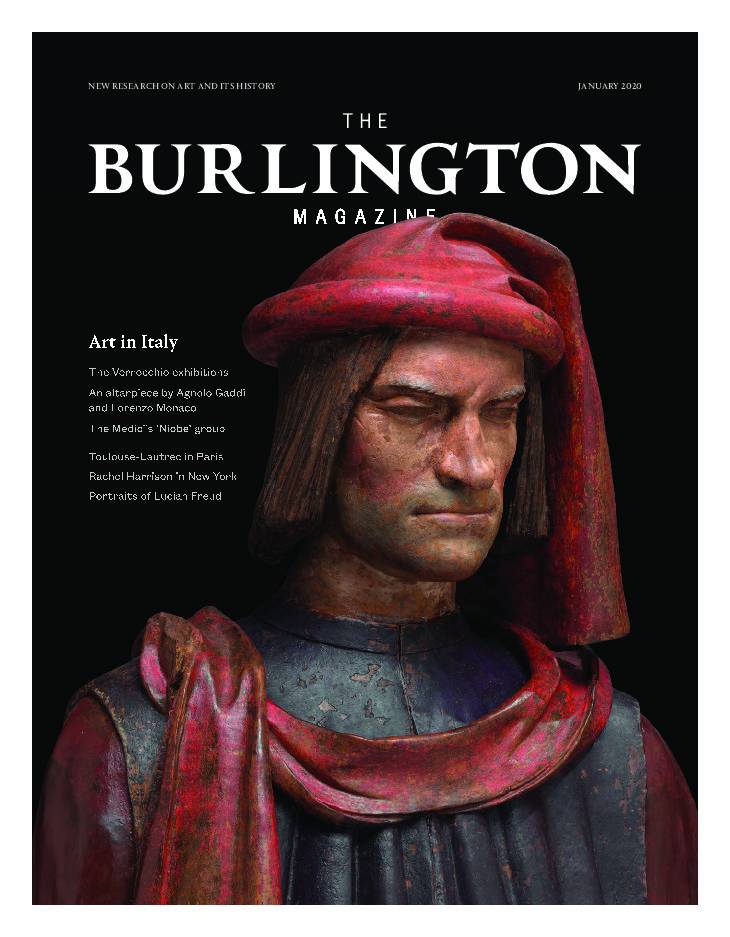 Everything seemed to be going so well at the National Portrait Gallery, London. In the five years since he was appointed its director, Nicholas Cullinan has overseen some significant acquisitions, notably Thomas Lawrence’s unfinished Arthur Wellesley, 1st Duke of Wellington (1829), and has maintained a tradition of imaginative commissions with such works as Andreas Gursky’s photograph of Sir Jonathan Ive (2019). Excellent scholarly exhibitions (Gainsborough’s Family Album in 2018–19 and Elizabethan Treasures: Miniatures by Hilliard and Oliver in 2019, for example) have more than outweighed the embarrassing flop of Michael Jackson: On the Wall in 2018.(1) Cullinan’s greatest achievement has been to raise funds for an exceptionally ambitious £35.5 million capital project,‘Inspiring People’, for which £32.7 million has been given to date. The National Heritage Lottery Fund has awarded it £9.4 million on top of its project planning grant of £900,000, made in 2017, and the Garfield Weston Foundation has given £6.5 million.

This will pay for a complete remodelling of the Gallery’s interior by Jamie Fobert Architects, which will include the creation of an entrance on the building’s palazzo-like northern façade, leading into a large new entrance hall. It is disappointing that the project will not result in additional display space for the collection, but it is principally designed to overcome many of the problems with lack of public space and awkward visitor routes that have bedevilled the Gallery almost from the moment it opened in its present building in 1896. It is sad to report, therefore, that the widespread goodwill towards the NPG’s plans has abruptly dissipated with the announcement that as a result of these works it will have to close for three years, from 29th June 2020 to spring 2023.(2)

The most baffling thing about this decision is the way it was made public – in the fourth paragraph of a press release issued on 5th November concerning the programme of loans to other UK institutions that will take place while the Gallery is closed.(3) There was no advance warning of this announcement nor did the NPG seek to explain in detail why complete closure is needed. The perception of indifference to public opinion is only slightly alleviated by the evidence that this was not what was envisaged when the plans for ‘Inspiring People’ were announced. In its current ten-year corporate plan, published in February 2017, the Gallery states that one of its strategic objectives will be to ‘Develop a charged exhibition and free displays programme during the Inspiring People project build that will attract audiences to the Gallery and mitigate some of the decrease in visitor numbers during building work’.(4)

It is astonishing – and frankly disgraceful – that the NPG made the announcement before it had a fully worked out plan for the closure. Four questions immediately present themselves, none of which the Galley has answered. Most importantly, perhaps, what will become of the NPG’s staff over the next three years? We have simply been told that the Gallery is beginning to consult with them about the inevitable job losses. Presumably ways can be found to keep the curators occupied, but the future looks bleak for the front of house and security staff. Secondly, how will the Gallery cope without the income it receives from visitors, notably from admission to exhibitions (£3.7 million in 2018–19)? Thirdly, what will happen during the closure to the NPG’s grant in aid from the government (£7.6 million in 2019)? Many will think it unreasonable that it should expect to receive this level of public funding while it is closed. Finally, in its press release the NPG makes much of the fact that it is ‘calling for expressions of interest from organisations interested in partnering with them during this time in order to share the Collection around the country as widely as possible’. This seems the least it can do, but who is bearing the cost of the loans? The country’s hard-pressed regional museums and galleries should not be expected to subsidise them.

It seems inconceivable that the NPG’s director, trustees and PR advisers made no effort to forestall the inevitable criticism that their decision has attracted: as Bendor Grosvenor has written in the Art Newspaper: ‘As a public institution, the NPG should have been honest about the closure from the outset’.(5) Parallels have been drawn with the lengthy closure of the Rijksmuseum, Amsterdam, for its internal remodelling in 2003–13. It is often forgotten, however, that the Rijksmuseum never completely closed – it always kept some galleries open to show key works. Such an option may perhaps not have been possible for the NPG – it is much smaller – but why could it not have acquired a temporary home for exhibitions and highlights from the permanent collection while the main building was closed? There is a precedent in the NPG’s outstation in Carlton House Terrace, which it used for exhibitions in the 1970s.

Such a strategy would not only be a way to keep a selection of the Gallery’s most significant portraits on show in London for the next three years; it could also be used for more topical and imaginative purposes. Cullinan begins his introduction to the NPG’s corporate plan by stating, ‘At a time when identity, shared culture and civic values are increasingly relevant to us all, the National Portrait Gallery is uniquely placed to generate a discussion by reflecting on our common artistic, cultural and social history, in short, on what binds us together’. This admirable ambition has acquired an urgent new relevance with the results of last month’s General Election, which has ensured that the United Kingdom will leave the European Union in 2020 and has called into doubt the future of Scotland and Northern Ireland within the Union. By closing its doors so emphatically, the NPG is opting out of participation in one of the most significant issues of the moment, and one that it is uniquely qualified to address. Although under Cullinan’s directorship it has sought to some degree to reposition itself as a centre for the study of portraiture as an international subject – hence its exhibitions on such artists as Cézanne and Picasso – its core purpose, as set out in the Museums and Galleries Act 1992, is to ‘promote the public’s enjoyment and understanding of portraiture of British persons and British history’. At a time when the definition of ‘British’ is under debate as never before it seems that the NPG’s ill-timed closure is ultimately an evasion of its statutory mission.

2. The NPG’s library and archive will remain open.