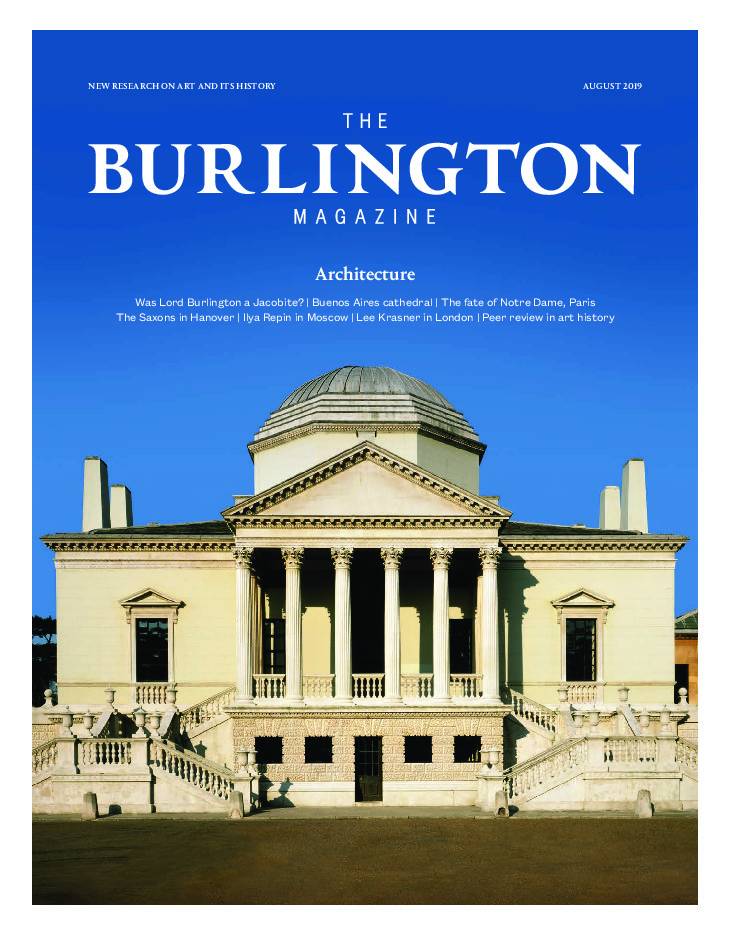 EDITORIAL
At the Yale Center for British Art

At the end of June Amy Meyers stepped down as Director of the Yale Center for British Art, New Haven, after seventeen years. Her appointment in 2002 coincided with the twenty-fifth anniversary of the opening of the Center in its purpose-built home on Chapel Street, designed by Louis I. Kahn. Among the many achievements of her directorship has been the comprehensive renovation of the building, an eight-year project completed in 2016, which set a new benchmark for the historically informed conservation of a work by a major twentieth-century architect.

Most striking of all perhaps was the refurbishment of the Long Gallery on the fourth floor. Later subdivisions were removed to reveal Kahn’s noble interior, which is now used, as the Center’s founding director, Jules Prown, wished, as a study gallery. It is hung with a floor to ceiling display of some 240 works, which allows the visitor to sample at a glance the astonishing depth and diversity of this great collection, the core of which was gifted to Yale University by Paul Mellon in 1966 together with a generous endowment.

As anyone who has met Meyers can testify, she is allergic to public praise, but that in itself reflects one of her most important legacies to the Center, the spirit of collegiality and collaboration that she has fostered in all its activities. Most evidently, the Center works in partnership with its sister foundation in London, the Paul Mellon Centre, and with the university of which it forms a part, not least Yale University Press and Yale University Art Gallery. The Center’s attitude to public access to its collections is also remarkably enlightened: it is free to visit in person, its collection has been catalogued and digitised for remote access and – admirably – high-resolution images of works out of copyright can be downloaded without fee.

In Britain this positive attitude to partnership has worked to the benefit of the country’s regional galleries, who by working with the Center have been able to stage exhibitions that their funding and curatorial resources would not otherwise have allowed. One recent example is The Paston Treasure: Riches and Rarities of the Known World, staged in 2018–19 at New Haven and at Norwich Castle Museum and Art Gallery, where this enigmatic seventeenth-century painting of the Paston family’s collection is housed. Both the exhibition and its catalogue were a major collaborative initiative, not only between the two museums but also between a large team of historians from a wide range of disciplines. As well as confirming the Center’s continuing loyalty to empirical, object-focused scholarship, the exhibition was a reminder of the support the Center gives to the study and display of historic British art in Britain itself, of particular importance since the national collection at Tate Britain has suffered such a regrettable decline in its public profile over the past decade.

The collegiality of the Center is evident also in the freedom and encouragement Meyers has given to its curators to pursue their own interests, both in staging exhibitions (there have been over fifty in the past seventeen years) and in making acquisitions. A current display at the Center, Photographs | Contemporary Art: Recent Gifts and Acquisitions (until 8th September), highlights two areas of particular recent activity, art since 1970 and photography. A new emphasis on the latter is evident also in the recent appointment of the Center’s first dedicated curator for photography. This raises the intriguing question of how attitudes to British art have changed both inside the Center and out during Meyers's directorship.

The level of change can be exaggerated: through his interest in book collecting – he was one of the greatest bibliophiles of his generation – Mellon developed an interest in historic photography, and despite a persistent myth that he was indifferent to modern art he was a discerning collector of works by his contemporaries, such as Ben Nicholson and Henry Moore. The distinctive quality of Mellon’s interest in British art has also provided a firm foundation for the developments in its study that have come to the fore since his death in 1999. Some, such as the impact of feminism, have been of importance in all areas of art history; others, notably post-colonialism, have a particular significance for historians of British art.

Mellon was not much attracted by the priorities of the American collectors who preceded him, who focused on swagger portraits of eighteenth-century aristocrats. As his love of the then-neglected area of sporting art makes plain, he wished his collection to be a picture of British life in all its aspects. It was therefore within the existing spirit of the Center for Meyers and her colleagues to place an emphasis on the role of women, as artists, collectors and intellectuals, as manifested in such exhibitions as Mrs Delany and her Circle in 2009–10 (which in part reflected Meyers’s special interest in the visual and material culture of natural history) and Enlightened Princesses: Caroline, Augusta, Charlotte, and the Shaping of the Modern World in 2017.

Mellon was also interested in the global manifestations of British art in the country’s empire, as is demonstrated by his admiration for the paintings of an artist who worked in India, Johan Zoffany (the subject of a large monographic show staged by the Center in 2011–12). Yet the great and often bitterly contentious issue of the relationship between British art and empire is largely a development of the past decade. It is possible that in time the most pioneering exhibition at the Center during Meyers’s directorship will be seen to have been Art and Emancipation in Jamaica: Isaac Mendes Belisario and His Worlds, in 2007–08. It now seems extraordinary that this exhibition, on an important visual record of slavery, found no venue in the United Kingdom (although it was seen in Kingston, Jamaica).

Among the contributors to that exhibition was Courtney J. Martin, then a doctoral candidate at Yale working on British art in the 1970s. Deputy director of the Dia Foundation in New York, where she has worked since 2015, Martin is Meyers’s successor at the Center. She is well qualified to take forward the realisation that has developed over Meyers’s time as Director of this great institution – that British art (like its architecture) was not simply a national art tradition but, for better and for worse, was a global phenomenon, and that the study of it is powerfully relevant to contemporary debates about empire, migration and identity.