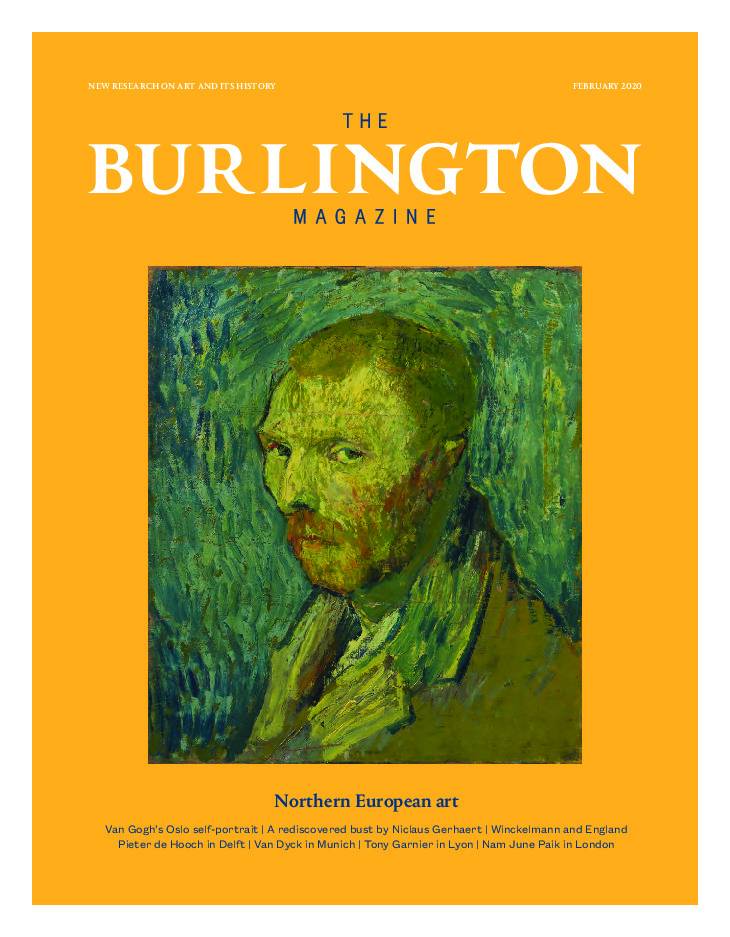 EDITORIAL
The National Trust at 125
Here is a tip for visitors to houses owned by the National Trust: look on top of the wardrobes. In this issue, Jeremy Warren publishes a reliquary bust of St Agnes from the workshop of one of the greatest late Gothic sculptors, Niclaus Gerhaert von Leyden. Warren identified the bust after it had been taken down from the top of a wardrobe in a dark corner of a bedroom of Anglesey Abbey, Cambridgeshire. Anyone familiar with the history of the National Trust’s collections may have recalled the celebrated incident in 1949 when staff sorting through a pile of junk on top of a wardrobe at Arlington Court, Devon, found an unknown painting by William Blake. There is, however, an important difference: the Blake was a serendipitous discovery; the Gerhaert has come to light as part of a systematic cataloguing of its sculpture by the National Trust. This project is running in parallel with the cataloguing of its furniture; a third comprehensive catalogue, of its photography, is in preparation. Warren’s article is the first in an occasional series on discoveries that have come to light as a result of these endeavours, which are necessarily far larger in scope than any museum equivalent: the Trust calculates that it owns some six thousand sculptures and around fifty-five thousand pieces of furniture.

The launch of the series coincides with the 125th anniversary of the foundation of the National Trust on 12th January 1895. In a blog post celebrating this milestone, the organisation’s Director General, Hilary McGrady, divides its history into four ‘chapters’.(1) The first was focused on the acquisition of landscapes that would form a recreational and spiritual resource for an increasingly industrialised nation. The second was dominated by the response to the threat to country houses, their collections and estates, and the third was concerned with the acquisition of coastline. McGrady concludes: ‘Having focused on places for all this time, chapter four was almost entirely given over to people, giving them more access to the places in our care through visiting, walking, swimming, learning or simply enjoying’. No doubt unintentionally, this reference to the shift from acquisition to access raises questions about the Trust’s priorities: is ‘swimming’ really as significant as ‘learning’?

For the National Trust, learning potentially covers a wide range of subjects, as McGrady’s emphasis on climate change, tree planting and carbon neutrality makes plain. However, the Trust’s commitment to investing in curatorial expertise and the academic research that is fundamental to a proper understanding of its houses and their contents has for some time been in doubt, prompting a strongly critical Editorial in this Magazine three years ago.(2) Ill-judged temporary rearrangements of the interiors of some houses and an unfortunate remark in 2015 by the former Director General, Helen Ghosh, that she believed visitors were put off by there being ‘too much stuff’ in the Trust’s houses seemed to mark a nadir in the organisation’s attitude to the collections in its care.

This makes the recent revitalisation of the Trust’s commitment to curatorship as impressive as it is unexpected. In the past three years it has near-doubled its number of full-time curators, from thirty-six to around sixty-five, and has reinforced curatorial leadership with the creation of new senior posts, notably a Director of Curation and Experience and a Curatorial and Collections Director. Equally significantly, it has enlarged its specialist publishing team, responsible for academic publications; the quality and quantity of the information provided about the collections online has also improved dramatically in that time. Another welcome change is a new emphasis on partnerships. Exhibitions are being planned in collaboration with museums and galleries, following the example of Prized Possessions, a touring exhibition of the Trust’s seventeenth-century Dutch paintings, which in 2017–19 was seen at the Holburne Museum, Bath, the Mauritshuis in The Hague and Petworth House, Sussex. The Trust is also supporting research at doctoral level through its membership (since 2019) of the Independent Research Organization Consortium, which gives access to Arts and Humanities Council funding; through the Open-Oxford-Cambridge Doctoral Training Partnership it is currently hosting two PhDs, one on ‘Jewish subjectivity and material self-fashioning’ at Waddesdon Manor, Buckinghamshire, and another on ‘Shugborough Hall, the Ansons and the eighteenth-century Atlantic economy’.

The choice of these subjects has in part been prompted by a wish to diversify the stories that the National Trust’s properties can tell. Research is allowing narratives that have been under-emphasised, from slavery and colonialism to issues of queer identity, to be told with authority, which is both welcome in itself and for the way it breaks with the Trust’s previous attempt to identify a dominant and simplifying story at each house. The range of its collections will be celebrated by the publication in June of a book, National Trust: 125 Treasures, by the Curatorial and Collections Director, Tarnya Cooper, using research by curators and outside specialists, which starts with black-figure Greek vases and ends with a sculpture by Barbara Hepworth.

These initiatives pose important questions for the Trust’s Director General and executive board. How will this new research be integrated into the presentation of the houses, whose managers are mostly not curators yet have a large degree of autonomy? How also will it be communicated to the public, given in particular the disappointing quality of the Trust’s guidebooks, now little more than lavishly illustrated pamphlets, albeit by distinguished authors? And how will the new publications resulting from curatorial initiatives be marketed and sold to the Trust’s 5.6 million members, given the long-standing resistance of those responsible for marketing and retail to promoting specialist books?

Taking its responsibility of care for its vast holdings as a given, what is the National Trust for? Even after 125 years it seems to find it hard to articulate this with clarity. Hilary McGrady’s emphasis on ‘people’ gives the impression that the organisation is fundamentally a visitor attraction or a sector of the tourist industry. Yet in the richness of its possessions and the depth of curatorial and conservation expertise on which it can call,the National Trust has the potential to be a great national organisation focused on life-long learning, ranging across disciplines to integrate the study of art, architecture and design with that of the natural world,gardens and landscapes. Will its leadership take the opportunity of the anniversary to put forward at long last a vision for the National Trust that possesses intellectual and creative ambition?