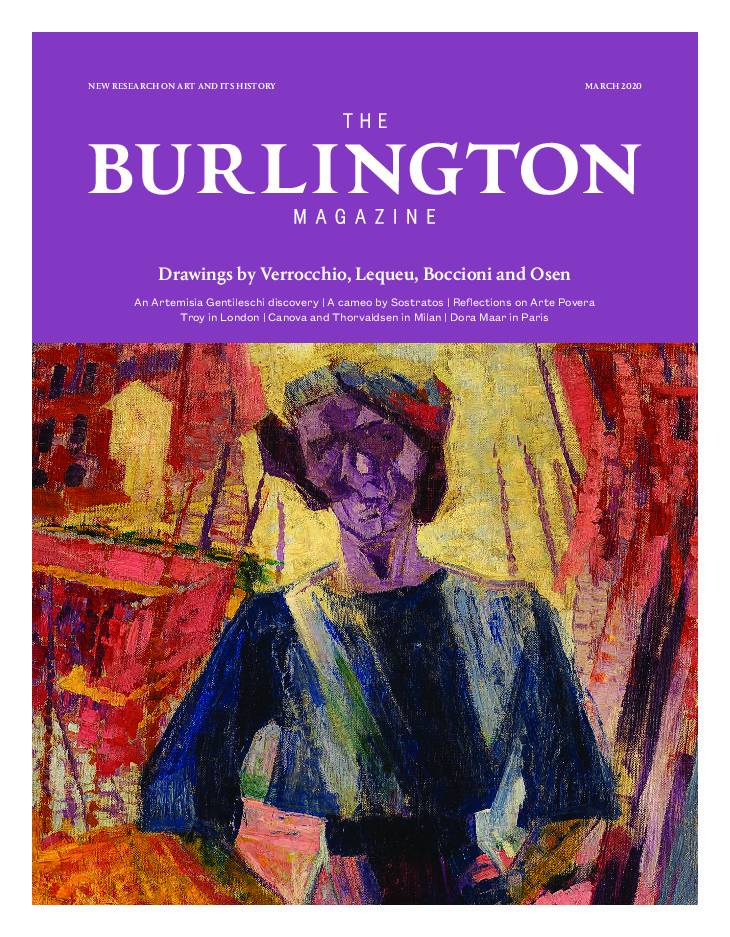 EDITORIAL
Open access and printed journals
Founded in 1932, the Zeitschrift für Kunstgeschichte is Germany’s leading academic journal for art history. Although quarterly, not monthly, it is in many ways a cousin of The Burlington Magazine, especially in its strong emphasis on empirical research. It too is financed by subscriptions, but, unlike the Burlington, which is the property of a charitable trust, it is owned by an academic publisher, Deutscher Kunstverlag in Munich, part of the De Gruyter group. Another important difference is that its editorial staff hold salaried academic posts, which fund their work for the journal. In December last year they all resigned following a dispute with Deutscher Kunstverlag about the issue of open access. In short, the editors wanted to move the journal to the highest standard of open access, in which the journal would be freely and permanently accessible to everyone immediately after publication – so-called ‘gold’ access – and without article processing charges being imposed on contributors to replace the loss of subscriptions. Deutscher Kunstverlag refused.(1)

This was not simply a matter of idealistic editors versus hardnosed commerce. Being in receipt of indirect funding from universities represented by the academic salaries of its editors laid the Zeitschrift für Kunstgeschichte vulnerable to the pressure on all university-funded research to be published in open access forms. Open access has its origins in scientific research and the justifiable belief that there should be free access to work largely paid for by public or charitable funds. In most cases the cost of publication in scientific journals has been transferred to its authors via article processing charges, which are paid by the authors’ universities or research institutions. This model has obvious difficulties for the very different funding model for research in the humanities, but since that research is also to a degree funded by universities it has been increasingly accepted that open access is a prerequisite for publication in all disciplines. Many journals – such as the Burlington – have adopted the less stringent version of open access known as ‘green’, in which the original publication is embargoed for a set length of time (usually a year, but six months in our case) and is then placed by its author in a freely accessible non-commercial subject or institutional repository. In addition, in the case of art history, in which publication usually involves third-person rights in the form of copyright images, it is accepted that the publisher cannot normally grant open access to more than the text.

The compromise represented by green open access seems likely, however, to be only temporary. In 2018, a group of national research funding organisations, with the support of the European Commission and the European Research Council, launched cOAlition S, which is designed to achieve ‘Plan S’, full and immediate open access to research publications in all disciplines.(2) cOAlition S states that ‘With effect from 2021, all scholarly publications on the results from research funded by public or private grants provided by national, regional and international research councils and funding bodies, must be published in Open Access Journals, on Open Access Platforms, or made immediately available through Open Access Repositories without embargo’. The definition of open access is very narrow in its terms but very broad in its application: ‘The public must be granted a worldwide, royalty-free, non-exclusive, irrevocable license to share (i.e., copy and redistribute the material in any medium or format) and adapt (i.e., remix, transform, and build upon the material) the article for any purpose,including commercial, provided proper attribution is given to the author’. On the issue of how open-access publication is to be funded, cOAlition S is less forthcoming: ‘There exist different models of financing and paying for Open Access publications. cOAlition S recognises that there are a range of business models that can be used to achieve full and immediate Open Access. cOAlition S calls for full transparency and monitoring of publication costs and fees’. Nonetheless, it makes it clear that green open access (which it describes as the ‘repository route’) must be regarded simply as an arrangement that is ‘transitional’ to gold access and that publishers with green open access should be undertaking ‘transformative agreements’ to move towards the goal of complete open access.

In its response to the consultation carried out by cOAlition S in 2018–19, the Association of Art Historians in the United Kingdom made a number of important points.(3) For example, the idea that open access means the right to ‘copy and redistribute the material in any medium or format’ may be applicable to scientific research, which is intended to be reused and where results need to be replicable, but it is not appropriate for the humanities and social sciences, ‘where not only the content but also the form of the text is crucial’. The Association also points out that art historians will be faced with paying fees that can be prohibitively costly for open-access licences for images. ‘Without a new funding structure in place for Plan S, many authors, especially those early in their careers or without affiliation will simply be priced out of sufficiently illustrating their articles if not from publishing in Open Access altogether’.

This last point is answered to a degree by the policy adopted by some online journals of encouraging authors to make use of the exemptions to copyright law known as ‘fair dealing’ (or ‘fair use’ in the United States) and not paying any fees. This can only to a very limited degree help journals such as the Burlington that exist in printed as well as digital forms: for print, high-resolution files are needed and they have to be paid for. Since open access can by its very nature be applied only to digital publications, costing models for its application need not take account of print, yet print still remains essential to the funding models of many publishers. Many, if not most, journals of art history count private individuals as well as institutions among their subscribers and many of those individuals are willing to pay those subscriptions only because they receive a printed journal. Open access is predicated on a scientific model of publicly funded research by academics in institutions producing research for fellow academics in institutions. Yet art history, like most of the humanities, has a far broader audience, who access research by diverse means in which physical publication remains very important. How many scientists now look at printed journals? How many scientists publish research in books? The editors of the Zeitschrift für Kunstgeschichte have departed to set up a new online journal, 21: Beiträge zur Kunstgeschichte und visuellen Kultur (21: Inquiries into Art, History, and the Visual).(4) It looks very promising but it is also yet further evidence that the drive for universal open access is providing a powerful incentive for art-historical scholarship to abandon print. Is that really to be welcomed?

4. https://21-inquiries.eu/en/, accessed 18th February 2020 The journal will also be available as print on demand.