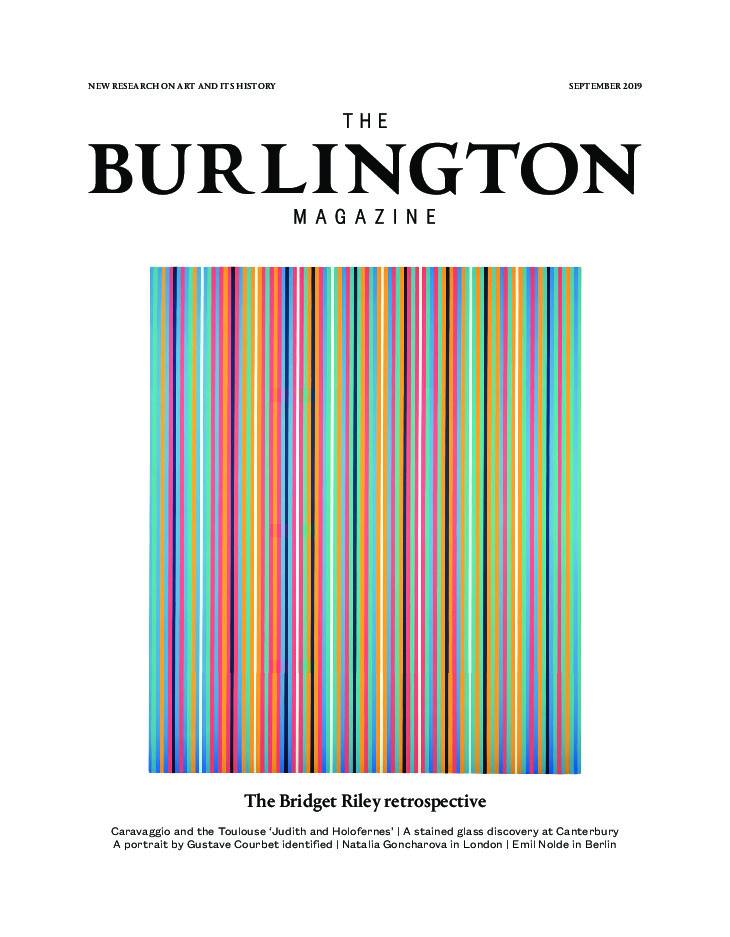 EDITORIAL
Out of the attic

Sometimes fairy tales really do come true. On first hearing, the story of the seventeenth-century canvas of Judith beheading Holofernes that was discovered in the attic of a house in Toulouse in 2014 sounded like a work of fiction, especially once it became known that eminent scholars were prepared to argue that the painting was by Caravaggio. The discovery called to mind the plot of Michael Frayn’s comic novel Headlong (1999), in which the lost panel in Pieter Bruegel the Elder’s series of the Seasons is discovered in a British country house. The book concludes with the painting (and house) going up in flames without its attribution ever being confirmed. The Toulouse story has had a happier ending, as recounted in the article by John Gash in this issue (pp.716–31). Shortly before it was due to come to auction in June, the painting was sold to an anonymous private collector with the promise that although it would leave France it would be put on public display in ‘an important museum’. When that happens, there will be time, away from the razzmatazz of an impending sale, quietly to consider whether the arguments put forward in the article for attributing the painting to Caravaggio are likely to achieve a consensus among scholars. It is undeniable, however, that the widespread disbelief that greeted the painting’s discovery was in part, as Mr Gash writes, a result of it seeming ‘too good to be true – a lost Caravaggio conveniently turning up, combined with the trope (so rare in reality) of unearthing a masterpiece in an attic’.

This trope has acquired added cachet now that the internet has made it much easier to discover sleepers at auctions. For example, when in 2015 the Paris dealer Bertrand Talabardon came to bid for Rembrandt’s long-lost Unconscious patient (allegory of smell) he soon realised that he had not been alone in spotting it on the website of a small New Jersey auctioneer, catalogued as a nineteenth-century painting by an unknown artist. Fierce bidding drove the price up from the estimate of $500–800 to $870,000. It is much more satisfying for a dealer to stumble on a major work in person, but such events are indeed rare, which is why, for example, the discovery of seventeen watercolours by William Blake in a second-hand bookshop in Glasgow in 2001 or the identification of two panels by Fra Angelico in a suburban house in Oxford in 2006 linger so long in the memory.

Major art-historical discoveries are made much more frequently than that, but they are usually the result of scholarly reattribution or fresh technical examination rather than a rummage through an attic. A lost masterpiece is far more likely to be discovered on the wall of a public art gallery than in a junk shop or provincial auction house. The classic example is the portrait of Pope Julius II acquired by the National Gallery, London, in 1824 but not recognised as an autograph work by Raphael until 1975. Such new attributions have been a core feature of this Magazine since its foundation – ‘discovery’ and ‘discovered’ are probably the most frequently recurring words in the titles of our articles.

A glance back through our coverage of Caravaggio reflects the reason why he is more likely than most artists to be the subject of an unexpected discovery. The intense admiration for his art in his lifetime and for a few decades after his death was followed by centuries of neglect that allowed paintings to be reattributed or lost sight of altogether. He is so famous now that it is often forgotten that the present understanding of his art is the work of barely three generations of scholars working since the early 1950s – among them Benedict Nicolson, Editor of The Burlington Magazine from 1947 to 1978. Mr Gash’s article in the present issue is the fortieth the magazine has published on Caravaggio since 1951. Before that date it had published only one, in 1927, and that was a dud – an attribution of a portrait of a woman owned by the dealer Hans Schaeffer.(1)

A parallel is provided by the rediscovery of the art of Johannes Vermeer, which began in earnest as a scholarly endeavour in the mid-nineteenth century. In his shorter notice in this issue on the provenance of Young woman standing at a virginal in the National Gallery, London (pp.747–49), Frans Grijzenhout charts the history of a painting that lost its correct attribution for many decades despite seeming to modern eyes so distinctive. Between its foundation and the Second World War the Burlington published eleven articles on Vermeer, which vividly document how such uncertainty persisted into the twentieth century. Not all would count today as scholarly articles – some are simply lengthy announcements of a discovery with little supporting argument (this was long before the era of peer review). Several take their place in the ebb and flow of scholarly debate. In 1905, for example, Charles Holmes published as a Vermeer a portrait of a man in the Royal Museums of Fine Arts of Belgium that is now attributed to Nicolaes Maes, and in 1921 Robert R. Tatlock (Editor of the Burlington from 1920 to 1933) published a work that still divides opinion, Girl with a flute in the National Gallery of Art, Washington.(2) In 1928 Tatlock correctly dismissed the attribution to Vermeer of Lady playing a guitar in the Philadelphia Museum of Art.(3)

The Magazine’s most significant contribution to Vermeer studies in these years was Cornelis Hofstede de Groot’s publication in 1910 of Woman holding a balance (National Gallery of Art, Washington), which on the basis of documentary research he had tracked down to a private collection.(4) In terms of the Magazine’s history, however, this discovery has long been overshadowed by the publication in the 1930s of two other newly discovered works, a Conversation piece and Christ with the disciples at Emmaus, which Abraham Bredius, Director of the Mauritshuis, identified as masterpieces by Vermeer.(5) In fact, both were fakes by Han van Meegeren. As has been pointed out, Bredius was so successfully hoodwinked by the latter painting because Van Meegeren had cleverly offered him a work that Bredius had hoped to discover – an early religious composition by Vermeer. By contrast, the Toulouse painting – which nobody has seriously suggested is a fake – was rejected by some people because its grotesque elements fail to reflect their preconceptions of Caravaggio. For all the apparent fixity of the canon of Western art, our understanding of the work of almost all great artists is fluid and can at any moment be disrupted by an unexpected discovery, whether in an attic or elsewhere.